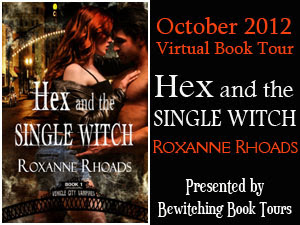 The Interview:
Can you tell the readers a little about yourself?
In addition to being an author and the owner of Bewitching Book Tours I am a mother to three children ages 6, 13 and 20.

I love to read (obviously 😉 and the majority of my life revolves around books. I try to involve my family in my book world as much as possible. However my oldest resists and the only time he touches a book is when he’s moving my stacks around LOL. Happily my husband and other two children are more than happy to attend signings, go the library and book stores with me whenever I want.

How long have you been writing?


For as long as I can remember. I started with poetry, essays and journalism. My first published piece was a poem when I was 11. I won numerous essay contests throughout middle and high school. I also wrote for school and local publications throughout my middle and high school years and into college. My poetry and articles have been published in local and nationwide publications.

I started writing fiction in 2005. Since then my short stories and novellas have appeared in several anthologies, many ebooks, and on websites. Hex and the Single Witch is my first full length novel.

Do you write full time?


No, I work full time as a book publicist for Bewitching Book Tours.

What are 5 fun/interesting facts about you?
1) My favorite holiday is Halloween. The month of October is one long event/festival/party for me. There’s something every weekend.

2) I love antiques and vintage goodies. I collect vintage Halloween items as well as whatever else catches my eye. I don’t collect based on $ value I just love things that are unique and old.

3) I love to be creative. When not writing I craft, paint, and garden (when I find the time).

4) I live in a house my grandfather built and I am surrounded by at least 5 generations of things from my family (maybe even a ghost or two). Being surrounded by the past is probably where I get my love of antiques from.

5) I am an animal lover. If you want to soften me up, show me pictures of cute animals.

What are the “must haves” for you when you sit down to write a book?


Peace and quiet, my notebook full of ideas and a diet coke.

What made you decide to become a writer and how old were you?
I don’t think it was a conscious decision, it just was. As an only child in the middle of nowhere books were my best friends. If I wasn’t reading I was making up stories and having my stuffed animals act them out. Eventually I started writing down ideas, poems, and stories. It was a natural progression from reader to writer.

Hex and the Single Witch is your newest release, can you tell us a little bit about it?
In Hex and the Single Witch most humans think that vampires, were-creatures and all types of Others are just movie magic and works of fiction because after a the Hysteria of the late twentieth century that almost eradicated entire species of Others, a mass worldwide spelling was cast that made humans once again lose their memories that Other folk exist. And the spelling was so successful that Others can walk openly among the humans and never be suspected of being Other.

The only people that see Others realistically are those who have the faintest drop of Other in their blood and those who are so strong willed the spelling didn’t take, and of course children who were born after the spelling took place.

The problem with this scenario is that not all Others are harmless, there are those thrive on danger, fear, and despair and revel in destruction.

So to keep the Others in line and keep supernatural crime to a minimum the Preternatural Investigation Team (dubbed the PIT Crew) was created as a special task force for the Flint Police Department.

Recruits for the PIT Crew are either Others or humans that know Others exist.

Detective Anwyn Rose is an Other, a witch to be precise but her magic hasn’t ever been too flashy, however she has the ability to “know” things. Either by touch or just a direct line into someone’s mind, Anwyn is very useful at a crime scene. She can see what happened just by touching the victim or an object at the scene.

Her partner, Detective Mike Malone is human, and not too friendly with the “monsters”. However he has a thing for Anwyn even if technically she could be labeled as one of the “monsters”, but Anwyn has a thing for a vampire, Galen. To Malone a vampire is the worst of all monsters especially when Anwyn’s love interest turns out to be the prime suspect in a string of killings they are investigated.

The whole situation leads to heated arguments, steamy encounters, a lot of misfiring magic- and a hot love triangle.

Who or what was your inspiration for writing Hex and the Single Witch?
The original background for the story came to me while I was driving through downtown Flint one day. After leaving the main strip of Saginaw Street that is the “downtown” area, many places look like ghost towns. Businesses are boarded up, empty, and falling apart. Houses are even worse off. There are entire neighborhoods in and around Flint that are completely or almost completely empty. Out of fifty houses two may still have residents. That’s scary on so many different levels.

Suddenly an idea popped into my head- “what if, after all the humans left, Others started moving in?”

And the basic back story to my series came to life. Flint, Michigan becomes a hotbed of supernatural activity. Ghosts, ghouls, vampires, demons and were-creatures move in making the human population the minority.

Do you feel that you can relate to one character in Hex and the Single Witch more than any other? And why?
Anwyn. I too lost my father at an early age and was raised by a single mom and my grandmother.

Are there any real life people that have inspired the characters in your story?
LOL. Oh yes but I have Frankensteined them into the characters. A piece here, a personality trait there…Anwyn is partially me in some ways. Her best friend Mel is a mix of several of my friends plus some fiction (of course).

What do you Love most about writing?
Giving life to the voices in my head and creating something out of nothing.

What is your biggest challenge when you write?
Finding the time to get everything on the paper and into the story.

Do you have any advice for any other aspiring writers out there?

What do you do when you are not writing?


Work. Spend time with my family. Search for unique vintage finds. I also garden and craft.

When you’re not writing what kind of books do you like to read?
Anything with paranormal elements- from cozy mysteries to urban fantasy. If it has a ghost, vampire, werewolf, witch or anything else “Other” chances are it’ll be on my bookshelf or nightstand eventually.

Since becoming published, what has been your favorite part of the process?
Networking- meeting other authors and people in the book world from bloggers to publishers. It’s a great world to live in 😉

If you can, tell us what is up next for you?
I am currently working on book two in the Vehicle City Vampires series. I hope to have it ready for publication by mid 2013. 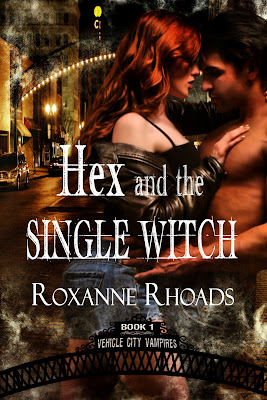 Synopsis:
Anwyn Rose is descended from a long line of powerful witches yet she can barely cast spells young witchlings have mastered. She has one functioning witch gift, the power of knowing, which she puts to good use as a Detective on Flint’s Preternatural Investigation Team.
It’s a new era in Vehicle City, supernaturals are running the town.
The P.I.T has their hands full with paranormal crimes. Top priority is a serial killer, who appears to be a vampire, draining young women in the city.
Anwyn is on the case with her sexy partner Detective Mike Malone. Complicating things is her relationship Galen, a vampire who looks more guilty than innocent, although Anwyn trusts her instincts even if her power is on the fritz.
Mysterious spells, compromising situations, and a possible demon on the loose make it hard to focus on the case, but Anwyn has to make things right before the human police execute the wrong vampire.
Hex and the Single Witch contains magick, a little bit of mystery, a lot of supernatural mayhem, and a sexy love triangle that will leave you wanting more.
Purchase:
Amazon Kindle     Smashwords   Barnes and Noble    Print 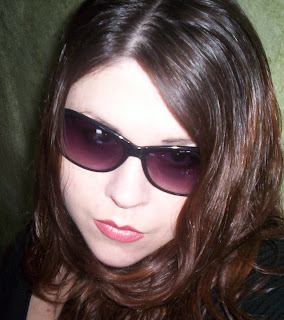 When not fulfilling one the many roles being a wife and mother of three require, Roxanne’s world revolves around words…reading them, writing them, editing them, and talking about them. In addition to writing her own stories she loves to read, promote and review what others write.

Roxanne is the owner of Bewitching Book Tours and operates Fang-tastic Books, a book blog dedicated to paranormal and urban fantasy books.

When not reading, writing, or promoting Roxanne loves to hang out with her family, craft, garden and search for unique vintage finds.

Connect with Roxanne
AuthorBlog
Facebook
Book Blog
Facebook
Bewitching Book Tours
Facebook
Flint Fang Fest
Twitter
GoodReads
LinkedIn
Google+
GIVEAWAY:
How would you like to win 1 of 4 Prize Packs  OR 1 of 5 copies for yourself?? Roxanne Rhoads has generously offered 4 Prize Packs and 5 E-Book copies TOUR WIDE. Just enter on the Rafflecopter entry form below! If you have any questions or concerns please leave a comment. Good Luck and Thanks for entering. 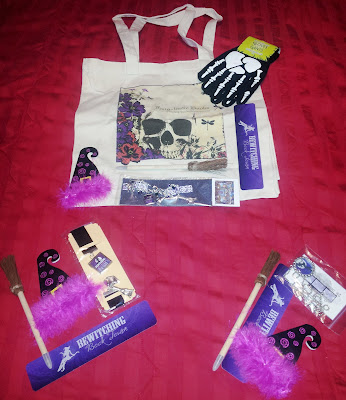 5 winners: 5 ecopies of Hex and the Single Witch. Open internationally

Disclosure: This Interview and Giveaway was provided by the Author as a part of the Bewitching Book Tours. This is NOT a compensated post. Prizes are NOT fulfilled by KUWTR.

email
[email protected]
follow me
← You Are Invited To The Royal Ball #DisneyPrincessWMT Book Review: Hex and the Single Witch by Roxanne Rhoads →