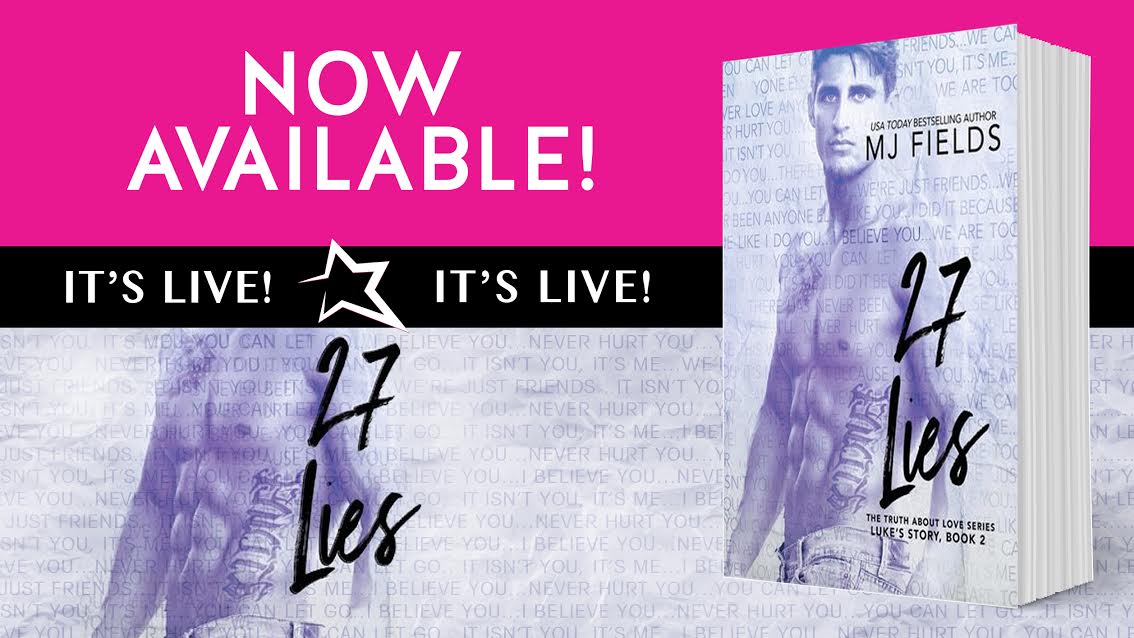 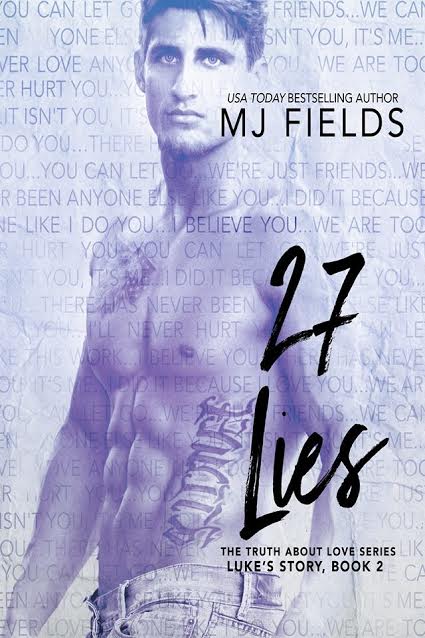 A long time ago…

I saw the pain she hid, and as I grew older, I understood that pain. The pain of being so much to so many that there is really never a “you”.

I took control of my life…

I had to get away from everyone who pulled at me in order to claim myself. When I became the man I was destined to be, I began to live. Then, one drunken night, Ava Links, no longer a little girl, said the right damn thing to me, and everything changed. After seven years of fucking her while home on leave with no expectations, now my life is out of control…

One bad dream, one I love you, one night of pushing her the hell out of my life, one drummer stealing her heart, and one explosion took everything away.

Lies are told.
Lies are unraveling.
Lies are going to destroy.
These are my truths. 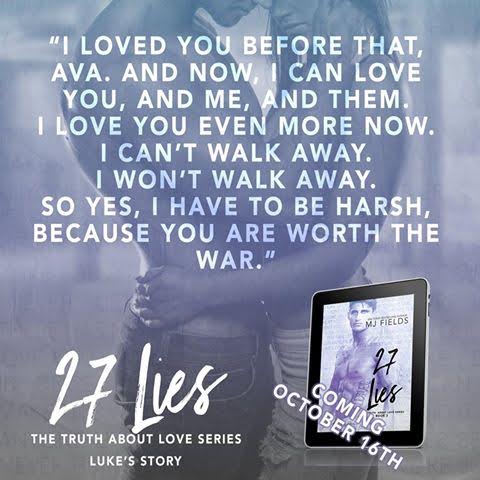 I watch as Dad and Tessa pull away from the curb, the place where Thomas Hardy, the love of my life, smiled at me before he took his last breath. I was so sure it wasn’t his last, and I was as sure that him being on life support would eventually mean he would wake up and tell me he loved me again.

Standing erect atop the gray sidewalk is the light pole that he was crushed against, pinned between it and a car, while on his way to get me a Snickers bar that I didn’t need.

I stand on the balcony and take in a calming breath. The babies are sleeping inside, freshly bathed, adorned in the cutest clothes money can buy, swaddled in their very own Bingos that I have in triplicate because my father insists I need them that way. Their bellies are full, and they have been rocked asleep in my arms.

There is no way they can actually be affected by my pain, my anger, my sadness, but I never want them to. Therefore, if I keep my grief to their sleeping hours, I know they will be okay. I close my eyes tight and pray they will be okay.

Praying. Why do I still bother?

I place my elbows on the brick overhang, peering down at that spot where black meets gray, where the love of a man and a woman got taken away in the blink of an eye.

But it’s not gone. My love. T and my love will never go away. We have a forever love.

I stand back and wrap my arms tight around myself, letting out a low groan and releasing the pain, the anger, the hate, and all the ugly in a place where I know I can, where it will not affect a soul.

The clouds use this time to part, and the sun peers through and shines down on me. Emotions come to a roiling boil in that moment, and I shut my eyes, seeing Thomas smiling back at me.

Really, there isn’t anything I look at that doesn’t remind me of him and the insurmountable love I have for a man who loved me so much. He lied during the pregnancy so my pain wasn’t as severe, making me believe he was the father of both our children.

There are lies in love, just as much as there are truths.

The pain of his absence is so copious it makes me sick. Sick to my stomach to the point I do throw up. My body can’t take the sickness it feels while it breathes in the air that surrounds me, in a world without T.

I slowly lower myself to my knees and cover my face as the tears spill out, the way they do when I am on this balcony that should have a rooftop garden that we grew together. A garden that grows and blooms, and comes to life, surrounded by our love.

I sit back against the brick wall as I take in the comfort of the pain’s release. I cry until I can’t anymore, and then I take a deep breath and stand up. I close my eyes once again, one last time for now, and picture him and all the beauty that is him.

Inside, I walk into the kitchen where I have moved everything back to where T had it before I moved in. I stand there and try to make sense of the way he had things put away. It’s stupid. I know it is. Somewhere deep down, though, I keep hoping he will come back, and I will want to fix it up for him.

However, he’s not coming back.

I take my multivitamins then force down the damn shake that Dr. Kennedy brought here after passing her in the hospital when Chance and Hope had their four-month checkup. She came to the apartment and told me I better be taking care of myself so I could take care of my children.

She oversteps in ways that are infuriating. I get angry every time I see her. Though I know I shouldn’t. I know I am directing my anger at her, but she asks for it, and it’s certainly easier than being angry at T for leaving me.

That’s another lie that happens when you love someone. Somehow in the grieving process, you get to a point when you feel betrayed by the one who left you. Like it was a choice they made.

I opened his closet one day and tore his clothes from the hangers. I threw them all over the floor. Then I turned to walk out and get a garbage bag to shove them in. When I returned, though, I saw the mess I made, and I crumbled into a pile of his things. I sobbed into his shirts that still smelled like him, like home and happiness and love.

I could never be mad at him for leaving me when it wasn’t his choice. He was taken away by some fucking drunk who stole a car and will never be punished for his crime.

Thomas Hardy loved me until his dying breath, just like he said he would, and I will love him until mine.

That day, in the closet, I cleaned everything up, put it all back where he had put it—or, at least I let myself believe I did—and I continued to cry while I did it.

Now I walk toward the laundry room, intent on doing something that involves taking care of our—yes our—children.

I flip on the light switch, but there isn’t a damn thing to do. All our clothes are clean, folded, and put away. I am thankful for the help Mom offered through the nanny, but it gives me too much free time.

Chance and Hope almost sleep through the entire night, only waking for one feeding each. They take two naps a day, each two hours long. There is hardly an occasion when one of them are asleep while the other is awake except the night time feeding.

When they are awake, I feed them, hold them, and simply love them. God, how I love them. They are my life, my love, the reason I breath, even though it hurts, and we watch TV.

Ones of Thomas Hardy in concert and interviews.

I walk into our room, mine and T’s, not mine and the babies, and sit on the bed that Thomas and I spent endless hours in. If I close my eyes, I can picture him here. If I concentrate, I can hear him laugh. If I let the pain go, I can smile, remembering how he took his time showing me just how much he loved me.

Until reality sets in, and the pain starts all over again.

I consider taking a shower, but then decide against it. I can sleep for nearly two hours straight if I go into the baby’s room now.

I look down as I enter, knowing if I look at the mural he painted first, I will cry. I will cry because it’s unfair that he is gone. It’s so unfair that I almost hate God. That’s why I look instead at what he left me.

He left me two beautiful children. I will always be grateful for them. Always. But would He take them, too? 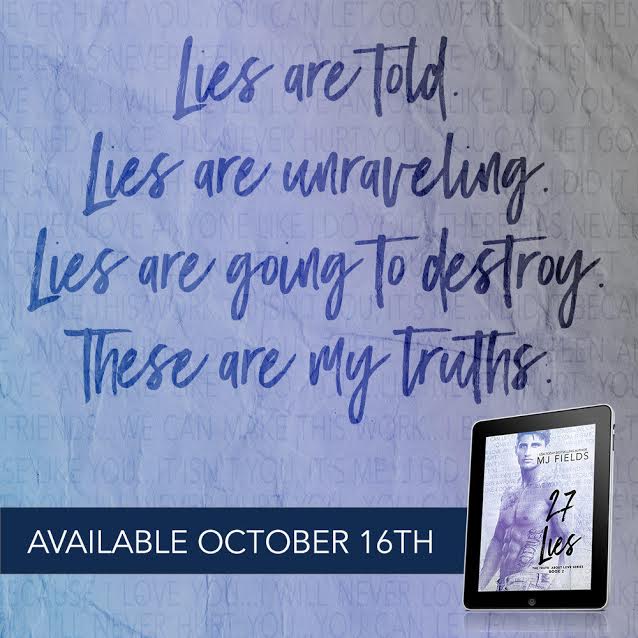 Now is your chance, 27 Truths is NOW AVAILABLE! 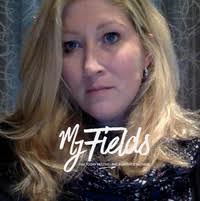 Together with her cousins, she wrote a newsletter and sold it for ten cents to family members.

MJ is a hybrid author and publishes an Indie book almost every month, and is signed with a traditional publisher, Loveswept, Penguin Random House, for her co- written series The Caldwell Brothers. Hendrix, Morrison, and Jagger. All three books in the series are published. The Caldwell brothers don’t grow into alphas, when their mother passes away they become her legacy, her good in the world of bad.

MJ was a former small business owner, who closed shop so she could write full time. She lives in central New York, surrounded by family and friends. Her house is full of pets, friends, and noise ninety percent of the time, and she would have it no other way.

Sign up for MJ’s monthly newsletter with giveaways: http://bit.ly/mjupdates

Disclosure: This information was provided by TRSOR Promotions and MJ Fields. This is NOT a compensated post.